The term peripheral blood corresponds to all the blood circulating through the body's blood vessel system and not concentrated within a specific organ (e.g. liver, spleen). Peripheral blood processing and analysis is a routine in clinical practice. However, the increasing number of translational research and life-saving therapies based on blood analysis, biobanking manipulation, and transfusion drive the importance of understanding the cellular and molecular universe within this biosample and its efficient handling and processing.

Here, we outline the different blood components, their applications, and we briefly describe the processing steps allowing their separation.

Blood components and their applications

Whole blood corresponds to the integrity of peripheral blood without any processing or separation steps. It contains a multitude of blood cells floating within the liquid phase or matrix called blood plasma. Whole blood samples are mainly used for basic genetic screening analysis. 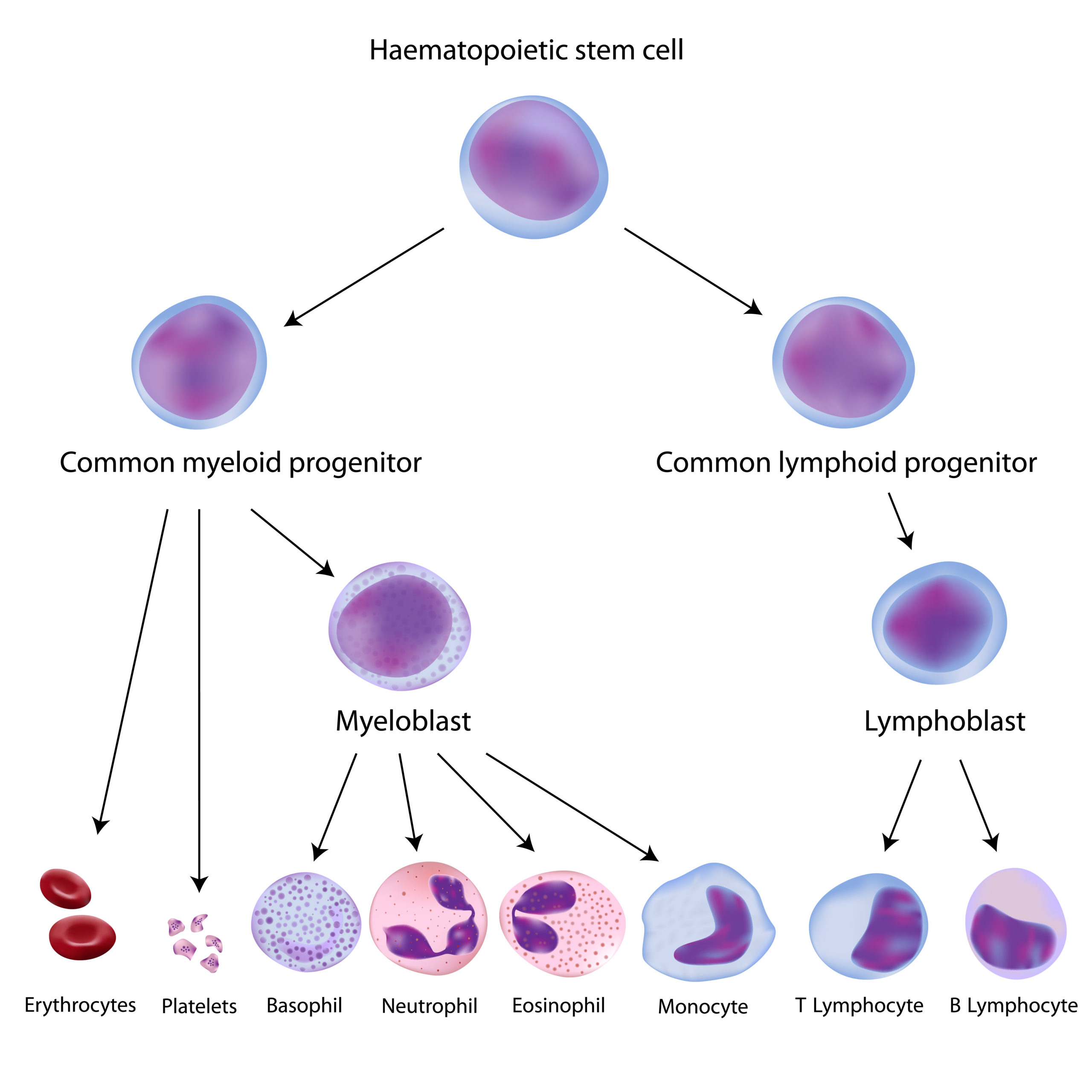 Erythrocytes or Red Blood Cells (RBCs) are the anucleated blood cells responsible for oxygen transport. An RBC count is a routine practice in clinical examination to determine overall condition and can be used to indicate anemia, malnutrition, leukemia, and lymphoma.

Platelets or Thrombocytes are also anucleated blood cells essential to life due to their bleeding prevention and clot activation roles that support hemostasis and wound healing. Lately, oncology studies are associating platelets to the ability of tumors to disseminate metastasis. Platelets interact with both cancer cells and tumor endothelial cells, forming the tumor vasculature. These intercellular interactions modify platelets into Tumor Educated Platelets (TEPs) 1, facilitating cancer growth and spread.

Peripheral Blood Mononuclear Cells (PBMCs) comprise T and B lymphocytes, NK cells, and monocytes and are an essential part of both the adaptive and innate immune response. Over the last decades, immuno-oncology has achieved groundbreaking results in its innovative cancer treatment methods by leveraging the patient's immune system. Thus, PBMCs have gained a strong presence in the spotlight of cancer research, with cytotoxic CD8+ T-cells being a key component for the majority of innovative immune therapies such as T-cell-inducing cancer vaccines, Chimeric Antigen Recombinant T cell therapies (CAR-Tcell), and checkpoint inhibitors. The success of using CD8+ T-cells to propel an immune response lies in their ability to recognize molecular signatures of cancer cells defined as Tumor-Associated Antigens (TAAs) and direct a cytotoxic immune reaction specifically towards this foreign malignant counterparts 2.

Monocytes are responsible for the innate immune response within the PBMCs. They can be macrophages or dendritic cells, and both possess anti-cancer properties because they present the tumor antigens to T-cells. However, when recruited to the cancer site, monocytes can have pro-cancer effects by secreting cytokines and contributing to the local inflammatory signaling within the tumor microenvironment.

Granulocytes are the immune cells of the innate immunity response defined by the presence of granules in their cytoplasm. Granulocytes consist of eosinophils, basophils, mast cells, and the most abundant type: neutrophils. Similar to macrophages and dendritic cells, neutrophils are a topic of interest in cancer research because of their recruitment to the tumoral microenvironment. Once recruited, they can have a dual role by either suppressing tumor growth or promoting it by pro-inflammatory and pro-tumoral cytokines. Due to these characteristics, neutrophils have the potential of being successful cancer biomarkers or therapeutic targets 3. Blood plasma and serum: how do they differ?

Plasma is the liquid phase of whole blood. Plasma contains all clot formation factors such as prothrombin, fibrinogen and platelet-activating factor. If a clot reaction occurs, the blood matrix is then called serum. Therefore, the main difference between plasma and serum is the latter's lack of clot formation agents.

There is a growing interest in plasma and serum samples as research on liquid biopsy techniques are advancing. Both blood liquids are rich in macromolecules and are used for biomedical research and diagnostics. However, there is no simple right or wrong answer to the best blood matrix for liquid-based tests. The choice between the two specimens depends mainly on the type of target molecule and analytical approach 4.

In a research study comparing the two liquids for the purposes of downstream metabolic analysis, Yu and colleagues observed high correlations between the plasma and serum and their conclusion was that both could be used in metabolomic studies. However, the authors reported a few important differences 4. The lack of clot formation factors in serum creates a partial deproteinization of the sample, making the remaining molecules more concentrated. Thus, serum gains an advantage when measuring small molecules with low abundance.

The study reports both matrices to display good stability of metabolites, however, plasma tends to reveal more biomarkers. Notably, plasma is also characterized with better reproducibility, which is likely to result from the less complicated collection procedure as it doesn't require a coagulation time.

When it comes to proteomic studies, it is vital to keep in mind that varying amounts of other proteins are incorporated into the clot by specific or non-specific interactions and removed from the serum fraction. Time, temperature, and intensity of the clot formation might influence the proteomic profile and final concentration of the sample. For plasma, the choice of anticoagulant and storage temperature can affect the stability and analyte profiles.

Using the wrong matrix can lead to inaccurate diagnoses or results. Additionally, the pre-analytical conditions may act critically on the uniformity of serum and plasma samples, leading to a further accentuation of biased results. Therefore, It is highly recommended to identify the best matrix for your specific study and evaluate the effects of pre-analytical conditions on its stability and result outcomes at the initial phase of your collection. As whole blood does not require any processing steps and can be directly frozen, it is the easiest to collect, transport, and store. More sophisticated analysis requires cleaner blood components, which implies separating the sample.

Blood processing aiming to differentiate and separate the multiple components relies on the classical principle of density centrifugation. When introduced to centrifugal force, blood particles will separate in function of their relative density. Ultimately, the correct isolation of the different components and preservation of their functionality requires specific protocol modifications and adaptations. It is essential to know which blood component is most relevant for your project, where it will be located according to its density, and the best methods to retrieve it.

Subjecting your blood sample to a single-step centrifugation, preferably with a swing rotor, will separate the components depending on their densities. Hematocrit and red blood cells will be at the bottom of the tube with a whitish layer of PBMCs on top of them which is also referred to as the buffy coat. The lightest fraction corresponding to plasma containing platelets is recovered at the top of the tube.

If PBMCs are the component of interest, a cleaner fraction separated from the RBC layer can be obtained by adding a density gradient to your centrifugation. A density medium (usually Ficoll) of 1.077g/ml is layered at the bottom of a conical centrifugation tube (Figure 2). The blood fraction (traditionally diluted with 1:1 volume of PBS) is carefully layered on top of the gradient. Following centrifugation, with a swing rotor, all components will be separated as described previously. The difference is that PBMCs and RBCs fractions will be separated by the gradient medium with the RBCs left at the bottom, allowing the collection of a cleaner immune cell fraction 5.

Another informative component isolated together with PBMCs at the level of the buffy coat are the Circulating Tumor Cells (CTCs) 6. Isolation and characterization of such cells are challenging, but works are under development due to the solid promises for non-invasive cancer characterization that CTC isolation offers.

Isolation of granulocytes follows the same principle but requires a denser gradient as this cell type is "heavier" than PBMCs and is usually positioned between the PBMC and the RBCs fraction.

Depending on the downstream needs of the study, subsequent plasma purification could be applied to eliminate platelets that remain in the plasma fraction after the gradient centrifugation. The process involves additional high speed centrifugation cycles. This is also the principle for platelet isolation7 for subsequent downstream analysis and characterization. The final product will dictate the specific parameters such as centrifugation speed and temperature.

Serum isolation requires a clot reaction that either occurs spontaneously or is being induced by blood tubes containing coagulation factors 8.

The blood component of interest - a guiding point in your collection

Many organizations, such as the Association for the Advancement of Blood and Biotherapeis, are supervising and advocating for correct deployment of blood samples for research and therapeutic purposes

Audubon Bioscience recognizes the need of such efforts and the importance of appropriate design and conduct of blood biospecimen collections.

The blood component of interest will orchestrate many crucial aspects of the collection process, such as container type, collection methods, transportation conditions and logistics, and processing protocol. Find out more about safe and effective blood collection practices here.

We have the expertise to assist and guide your blood collection process according to your project's needs. Visit our blood products pages or get in touch with our team to learn more!